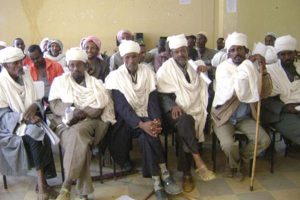 Faith to Action Network’s workshop on ‘Advocacy and Resource mobilization’ that was conducted in Mombasa, last November 2016, has helped us to better understand our role as faith leaders besides scientific approaches to advocacy and resources mobilisation. I remember the first day when Ms. Jackie Katana presented on advocacy; one of the sharp statements she stated was that ‘Faith Leaders are custodians of the values’.

When I went returned home, I ensured that Evangelical Fellowship of Ethiopia (ECFE) made its target to focus on religious leaders from major religions like Protestant, Orthodox, Catholic and Muslim faith communities on issues concerning Family planning and wellbeing.

As a result, ECFE is partnering with World Vision/Ethiopia, to reach to over 805 leaders in 23 districts of the northern, eastern and central part of the country focusing on maternal health, harmful traditional practices (HTP), HIV/AIDS, Family planning, Nutrition and the likes. We are fighting hard the misconception that religious institutions should not have any role on issues like health of the family planning, as they are concerned about spiritual services alone. Our work already bearing fruits because the government of Ethiopia has recently made it one of its strategies to use the capacities of faith leaders to mobilize the community for the purposes indicated earlier. The religious leaders are now more willing to accept scientific facts on family planning and as a result they have reduced their resistance on modern contraception. The government is working with religious leaders to sensitise their congregations on the importance of family planning and other development issues. The value addition in working with faith based organisations and religious leaders is very well acknowledged and appreciated by the government.

Moreover since the training in November, ECFE has done its advocacy work among 315 religious leaders. At present they are becoming important community mobilizing agents in the wellbeing of the family. They speak to the community on the rights of children, women and the responsibility of the man. They are at the forefront of fighting harmful traditional practices, which are sometimes the direct result of religious beliefs and teachings.