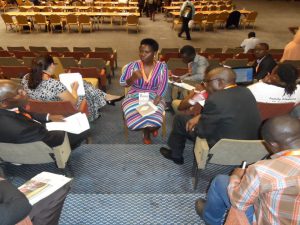 Together, faith actors are stronger in identifying and addressing injustices, raising awareness on, advocating and campaigning for women rights and gender equality.

The African Union recognizes gender equality as a fundamental human right and an integral part of regional integration, economic growth and social development. Unfortunately, the realization of women’s rights and gender equity is far from being achieved in Africa.

Our #RightByHer campaign focuses on four specific rights (1) the fight against gender-based violence and (2) against harmful practices in particular child marriage and female genital mutilation, (3) the promotion of reproductive rights and (4) the fight against HIV and AIDS. We are making headways:

In 2017, in partnership with All Africa Conference of Churches, Faith to Action has rallied faith actors’ input into the Africa Union’s new gender strategy, hosting the first ever African consultation with faith actors on an African Union policy.

In the same year, Faith to Action coordinated 10 faith actors’ participation and contribution to consultations on the East African Legislative Assembly’s Sexual and Reproductive Health and Rights Bill.

In 2018, in partnership with Christian Connections for International Health, Faith to Action will host the faith pre-conference to the International Conference on Family Planning 2018. We encourage all faith actors to submit abstracts on their family planning work.

Our members fight for gender equality and human rights in all corners of the world: For example, in the Philippines Catholics for Reproductive Health has gained greater institutional support of the Catholic diocese of greater Manila, the Imam Council, the United Church of Christ in the Philippines and the United Methodist Church for young people’s reproductive health. Sheikh Luaba Mangala met the Democratic Republic of Congo’s Prime Minister and faith leaders of all major faiths to inform and educate them about reproductive health and family planning and convened a groundbreaking national conference for religious leaders on family planning. Supreme Council of Kenya Muslims together with a team of religious and medical experts from AL-Azhar University organized a learning Caravan in Kenya’s coastal counties. Subsequently, 63 imams adopted a 7-point commitment in support of Child Spacing.

However, there is more that faith actors can do to support women and girls’ empowerment. Establishing health facilities, schools, educating congregations and the general public, participating in the formulation of laws, policies, budgets and programs that impact on women and girls is crucial. Anchoring these efforts on faith scriptures provides strong foundations for institutionalization and mainstreaming within religious structures, policies and practices.