Faith to Action Network > In the News > Advocacy > Child-spacing in Islamic Context, a Caravan at Kenya’s Coast

Child-spacing in Islamic Context, a Caravan at Kenya’s Coast 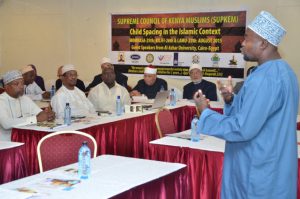 Faith to Action Network in partnership with the Supreme Council of Kenya Muslims (SUPKEM), a team of religious and medical experts from AL-Azhar University and the County Governments of Kilifi, Lamu & Mombasa, on 22-30th August 2015, conducted a successful caravan on child-spacing in Islamic context.

The caravan widely addressed a range of sexual reproductive health issues such as child spacing, early marriage, female genital cutting (FGM), safe motherhood as well as peaceful co-existence between communities of different faiths. Furthermore, the team carried out successful engagements with top-level government officials to advocate for increased budgetary allocation for SRH and FP services in the three counties.

A component of the caravan was processions in Mombasa, Malindi and Lamu towns. The processions comprised of local means of transport like Tuktuk (a three wheel motorcycle), motorcycles in Mombasa and Malindi, as well as donkeys in Lamu town were used in community engagement and mobilisation. Besides, training workshops were conducted for Imams and Sheikhs, centered around medical and theological aspects of SRHR and discussions on prevailing understanding of SRH issues. The trainings helped address myths and misconceptions on SRH. Likewise, lectures were offered inside the mosques during the afternoon and evening prayers. The trainings, seminars and meetings were conducted in different languages (English, Swahili and Arabic) with translations.
The team also conducted visits to select health facilities providing maternal and child health services. As a result, Kenya received four scholarships for gynecologists and embryologists to study at at Al-Azhar University. Three scholarships were offered to Tawfiq Hospital in Lamu and one to Faith to Action Network – extended to University of Nairobi, School of Medicine Department of Obstetrics & Gynaecology, at Kenyatta National Hospital.

As a result of the different issues identified in the caravan and authoritative clarifications provided, Faith to Action Network is currently developing an audio visual issue catalogue based on the content of the caravan that will be further used by trained religious leaders to conduct outreach. The Network is seeking to engage partners in developing the Caravan resource materials in different formats especially multimedia formats to expand reach out to the target audience especially women and youth.