Church out to foster gender justice across Africa 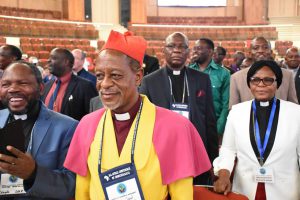 Kigali, RWANDA, 7 JULY 2018 (F2A) – The All Africa Conference of Churches has resolved to proactively promote gender justice through her future programming. This follows the adoption of various resolutions by the AACC’s highest decision-making organ sitting in Kigali.

Led by her newly instated General Secretary, Rev. Dr. Fidon Mwombeki, the General Assembly adopted resolutions from both the Theological Institute and the Women’s Pre-assembly and committed to work closely with the African Union in implementing Agenda 2063. “I look forward to continue the success of the AACC. I campaign for Agenda 2063, ecumenical theological education, gender justice and many other others,” Dr. Mwombeki said in his acceptance speech. Listen to the acceptance speech by Rev. Dr. Mwombeki here.

The 11th edition of the General Assembly, as well as its pre-meetings was attended by over 800 delegates mainly from Africa, but also included supporting partners from Asia, Europe and USA. Resolutions adopted in Kigali will benefit over 120 million people who belong to its member institutions. The AACC is the largest association of Protestant, Anglican, Orthodox and Indigenous churches in Africa and is made up of 185 member churches and Christian councils in 40 African countries.

A communique from the Theological Institute reads in part: “As young theologians, we recommend that the church acknowledges and implements the international, regional, sub-regional and national frameworks, including Sustainable Development Goals, the 2063 African Union Agenda, treaties, conventions, protocols that seek the theological foundations in promoting human dignity and peace for all.”

Currently in its 8th edition, the Theological Institute explored the missiological challenges in Africa with regard to the theme “Respecting the dignity and God’s image in every human being (Genesis 1: 26-27).  The thematic section on “Perspectives of the future for African Ecumenism” had a session titled gender justice and human dignity which was jointly facilitated by Director of  AACC’s Theology, Family Life and Gender Justice department, Rev. Dr. Lydia Mwaniki and Vitalis Mukhebi (Faith to Action Network). This session was quite popular with the participants that it was split into two separate days. In the first day, participants learnt the theoretical aspects of the theology and legal foundations around gender justice. On the second day, participants were split into groups according to their respective countries, where they explored provisions of country constitutions regarding regional and international legal frameworks. It was obvious from presentations in plenary that only a handful of clergy present had a firm understanding of their national laws regarding gender justice hence their inability to pinpoint specific legislation that needed revision. Whereas it was generally accepted that institutions operate within the country legal frameworks, the group discussions also highlighted the disconnect between institutional guidelines and national laws.

The communique from the Women’s pre-assembly decried the high prevalence of negative social norms such as child marriages, Female Genital Mutilation (FGM), and child labour among others which continue to distort the image of God in the woman in Africa. The statement called on Governments, development partners and other stakeholders “to work with their national institutions, international organizations like Interpol, UN organizations and international human rights bodies, to prevent and protect women from human trafficking, harmful cultural practices, laws and policies that discriminate against them.”

Speaking after the event, Rev. Dr. Lydia Mwaniki thanked the secretariat of Faith to Action Network for supporting in writing the communiques. “We are now in the process of developing our programmatic thrusts and drawing our strategic plan for the next five years. We count on your usual unwavering support in the process of implementation,” said Dr. Mwaniki.

Faith to Action Network will continue supporting the AACC with technical advise to translate the Kigali resolutions into actionable strategic plans for the institutions and her members.