Faith to Action Network > In the News > Advocacy > Conference: Towards Improved Collaboration to end GBV in South Africa

Conference: Towards Improved Collaboration to end GBV in South Africa 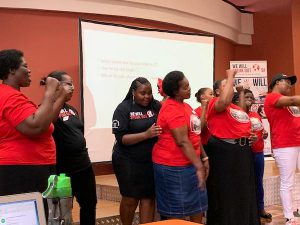 Durban, South Africa, 20 February 2020 (F2A) – Gender-Based Violence in its diverse forms has reached crisis proportions in South Africa, which sparked outrage amongst thousands of women and men resulting in mass demonstrations across the country in 2018 and 2019.  Outrage has been sparked also by the fact that several of the perpetrators of these incidents have been faith leaders.

Ninety people of many faith traditions met in Durban on February 20th 2020 to discuss faith responses to sexual and gender-based violence and how faith communities can contribute to the national strategic plan being developed by the South African government.

In November 2018, President Ramaphosa established a Steering Committee, which is currently finalizing a National Strategic Plan to end Gender-Based Violence and Femicide. The first draft mentions the faith sector only once, and in relation to its negative contributions to the problem. Since then a number of faith actors have advocated for a more significant positive role for the religious sector, not only as part of the problem but also the solution.

A number of faith actors have begun to address the issue and develop programmes to respond to this crisis. We have learnt that, as with HIV, GBV affects families and communities and we cannot remain silent. At this stage there is little cooperation between them, and there is a need for increased collaborative learning opportunities. A focus on doctrinal differences rather than on the points of agreement makes it difficult to speak and act decisively, not only to prevent acts of violence but also to respond to survivor needs without judgement and with compassion.

We Will Speak Out South Africa organized this 1- day Conference, with support of Faith to Action Network and ACT Ubumbano. 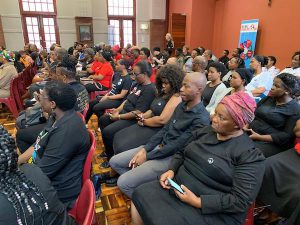 Its aim was to find common ground, understand what the NSP is calling us to do, and plan ways to be more united and impactful in responding.

There were many spirited discussion and a strong commitment to further collaboration.

A report of the day can be found here.