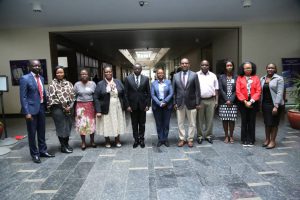 Arusha, TANZANIA, 13 May 2019 (F2A) – The Speaker of the East Africa Legislative Assembly (EALA) has welcomed support from civil society in the process of enacting a regional law on reproductive health that has been pending since 2017.

Already KELIN is conducting a desk review of the legal provisions on SRHR in the EAC Member States, something that Honorable Ngoga said was among the work required to be done by EALA together with CSOs and other stakeholders.

Those present during the Speaker’s Visit were Ms Olivia Nantaba and Bobi Odiko,  Principal Assistant to Honorable Susan Nakawukyi and Senior Public Relations Officer respectively, as well as Honorable Abdikadir Aden (EALA Member and Chair of Committee on General Purpose). Others were EANNASO’s Olive Mumba and Nadege Karire, EAHP’s Jonnial Mollel and Mwajabu Mninga and Caroline Kwamboka of Africa Parliamentary Forum. The Faith Community was represented by Peter Munene (Faith to Action Network) and Nosim Peter from the Evangelical Lutheran Church of Tanzania.

Honorable Aden said the Bill had some areas which require discussions with specific stakeholders such as religious leaders. He commended Faith to Action Network for mobilizing faith leaders in the region and sensitizing them on the Bill, as well as obtaining their inputs and participation in the process.

The Bill is expected to be tabled in the Assembly’s next financial year which begins in July 2019. It will follow a series of public hearings in all the six Community’s Member States as well as Assembly readings before being voted on for enactment. Paragraph 2 of Article 62 of the Treaty for the Establishment of the East African Community says, ” When a Bill has been duly passed by the Assembly the Speaker of the Assembly shall submit the Bill to the Heads of State for assent.”