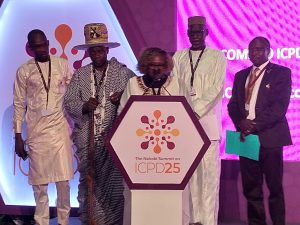 Development stakeholders in the faith sector have renewed commitments to work with governments and other partners to eliminate maternal deaths and gender-based violence in communities.

Through a written statement, faith actors attending the Nairobi Summit to celebrate 25 years since the International Conference on Population and Development (ICPD+25), said they will provide information and services on family planning to all persons, as is consistent with “our respective faith values.”

The statement was read at the Summit by Reverend Dr Lydia Mwaniki of All Africa Conference of Churches (AACC) during a special session for commitments by state and non-state actors. She was accompanied by Reverend Dr Ezekiel Lesmore, His Excellency Sheikh Saliou Mbacke, President of Senegal-based Cadre des Religieux pour la Sante et le Dévelopment (CRSD) and Mr Mohammed Bun Bida of Ghana’s Muslim Family Counselling Services (MFCS). Also enjoined in the reading of the statement was Dagbo Hounon Houna II, the spiritual chief of vodun in Benin, where 20 percent of the population, or a million people, practice pure vodun and another 40 percent embrace a form that incorporates Christian iconography.

Earlier in the Summit, the faith actors held discussions and presentations with other stakeholders. One of the sessions, titled “Keeping the Faith in SRHR” raised voices and experiences from diverse religious actors in support for the ICPD agenda with a special focus on sexuality and reproductive health. Panelists, who included Sheikh Mbacke and Dr Mwaniki showcased their respective institutional advocacy and actions contributing to the realization of the three zeros.

In another session, Reverend Fedis Mwai of the Council of Anglican Provinces of Africa (CAPA) was joined by Sheikh Rashid Omar (Muslim Intervention for Health Education, MIHE) in demonstrating faith actors provision of information on human sexuality to young people. Also on this panel was Ms Purity Kiguatha who presented #SexManenos, a program by the Africa Alliance of Young Men Christian Association (AAYMCA) to empower youth to realise their SRHR goals. According to research done under this program, religion is the third biggest influencer of young people’s decisions on sex and intimate relationships.

Ms Roselyne Pepela discussed abstinence+, an innovative approach where YWCA Kenya encourages young people to abstain, be faithful or use a condom.

The faith actors called on African governments not to impose additional or over taxation of citizens in the name of domestic resource mobilization and to curb corruption by strengthening public policies at all levels.