Faith to Action Network has many freely available resources for people interested faith perspectives to family health and wellbeing or to advocacy in general. Please select from the categories on the right.

Religious diversity has been a defining characteristic of India, where next to a Hindu majority, religions such as Islam, Christianity, Sikhism, Buddhism and Jainism have established their presence. This multiplicity of beliefs is reflected in India’s civil society space, where diverse faith-based actors have been operating.

Against this backdrop the following study aimed to provide insights into the extent of activities and services provided by faith-based actors in India, more specifically, related to sexual and reproductive health and rights (SRHR). To this end India’s four cities were selected, namely Bangalore, Delhi, Kolkata and Mumbai to carry out forty (semi-structured) interviews with Hindu, Muslim, Christian, Sikh, Buddhist and interfaith faithbased organisations (FBOs).

Indonesia is a predominantly Muslim country where the followers of Islam make up nearly 90% of the entire population. The country has a vibrant civil society landscape which is to a great extent composed of faith-based organisations (FBOs), especially Muslim social welfare organisations that provide a wide range of services, including health and education.

Faith to Action Network in cooperation with one of its members and founders, Muhammadiyah, an Islamic organization in Indonesia and the second largest FBO in the country, embarked on a research project to map out the extent of activities and services provided by faith-based actors in Indonesia, more specifically, related to sexual and reproductive health and rights (SRHR).

State of African Women: Right by Her Report

KENYA, Mombasa, March-11, 2018 - Whilst there are already comprehensive mechanisms in place that document the current status of ratification and domestication of the Maputo Protocol and the Maputo Plan of Action, few explore the pathways through which rights are operationalized in practice through laws, policies, administration, budgets and programs. Apart from a few well known cases, little is known about how Civil Society Organizations (CSOs), including Faith-based organizations (FBOs), influence these pathways and the challenges they face in mediating between duty bearers and rights holders. 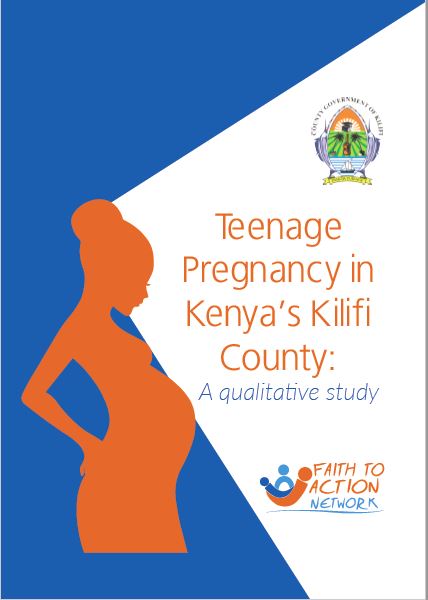 The research, on which this report is based, was meant to investigate the root causes, experiences and policy and related responses to the problem of teenage pregnancies in Kilifi County. Teenage pregnancies affect one in every four girls within the county making it the worst county in the country. Commissioned by the Faith to Action Network for purposes of generating evidence to enable advocacy relating to family wellbeing and health, the research adopted a qualitative design.

Kampala, Uganda (21 February 2018) - We, the faith and cultural leaders from the EAC Partner States,under the auspices of Faith to Action Network, have joined the EAC Heads of State Summit on Investment in Health of 2018 to deliberate on the major public health transformations fueled by changing human-animal environmental interactions, population dynamics and socio-economic development.

Toward Prosperity: The Role of Women and Men in Building a Flourishing World Civilization

The Baha’i Community has made significant contributions on the global arena’s process of empowering women and creating a world of equality between the genders. The community issued a powerful statement as a follow-up to the Fourth World Conference on Women and to the twenty-third special session of the General Assembly entitled “Women 2000: gender equality, development and peace for the twenty-first century”.

The statement affirmed a spiritual truth where women and men are equal, but acknowledged that this truth has been suppressed throughout history. It underscores the importance of the family as a crucial social environment within which formative education takes place and calls on societies not to exclude women from meaningful participation in work should they decide to dedicate a focused period of their lives to the rearing of children.

Faith to Action Network Secretariat with the support from the ministry of foreign affairs of the Netherlands conducted a study (Mixed methods design; with a follow-up qualitative phase after the quantitative study) to generate evidence on FBOs involvement in SRHR advocacy, policy influencing and programming. The findings of this mapping highlight on great opportunities but also barriers faith-based organizations face working on sexual and reproductive health and rights. These findings are intended to leverage existing strengths and mitigate challenges to deliver family health and wellbeing.
Download 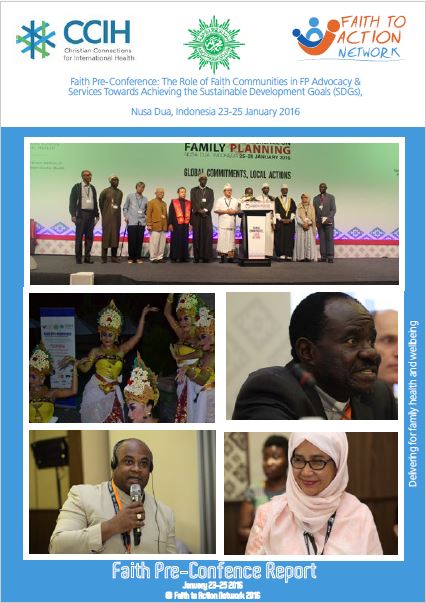 For the first time ever a Faith Pre-conference will precede the International Conference on Family Planning, held January 25th-28th 2016 in Nusa Dua, Indonesia. On January 24th-25th, faith leaders and representatives of faith-based organizations from many nations will meet to discuss best practices in faith-based involvement in family planning and how faith communities can advocate for increased support from their governments for lifesaving family planning services. 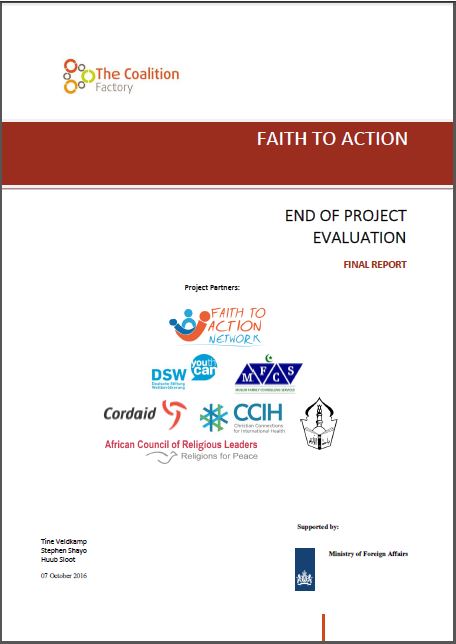 Faith to Action Network towards the end of the October last year, successfully completed the 3.5 years Faith to Action Project, that had been implemented by the Network secretariat commissioned by consortia partners- (DSW) Deutsche Stiftung Weltbevölkerung; Consortium partners; Cordaid – Catholic Organisation for Relief and Development Aid; ACRL-RfP – African Council for Religious Leaders-Religions for Peace; Al-Azhar University, International Islamic Center for Population Studies and Research; CCIH – Christian Connections for International Health; and MFC – Muslim Family Counseling Services - as a result of the Interfaith Declaration 2011 and whose secretariat had been hosted by the DSW in Kenya and supported by the Netherlands Ministry of Foreign Affairs.

In order to evaluate the extent to which the Network’s interventions had impacted policy and advocacy result besides quantitative increase of engagement in policymaking and advocacy and as part of our continued efforts to ensure accountability towards all stakeholders and commitment, to improving results, the secretariat commissioned an External Evaluation (The Coalition Factory) in August 2016 to evaluate the project according to OECD DAC evaluation criteria, provide valuable learning opportunities, good practice and recommendations to inform the existing and future projects. The evaluation revealed that Faith to Action project had generated progress towards better provision of SRHR information for young people in the intervention areas of the project as well as strong engagement of youth in peer education. Please read the full report here. 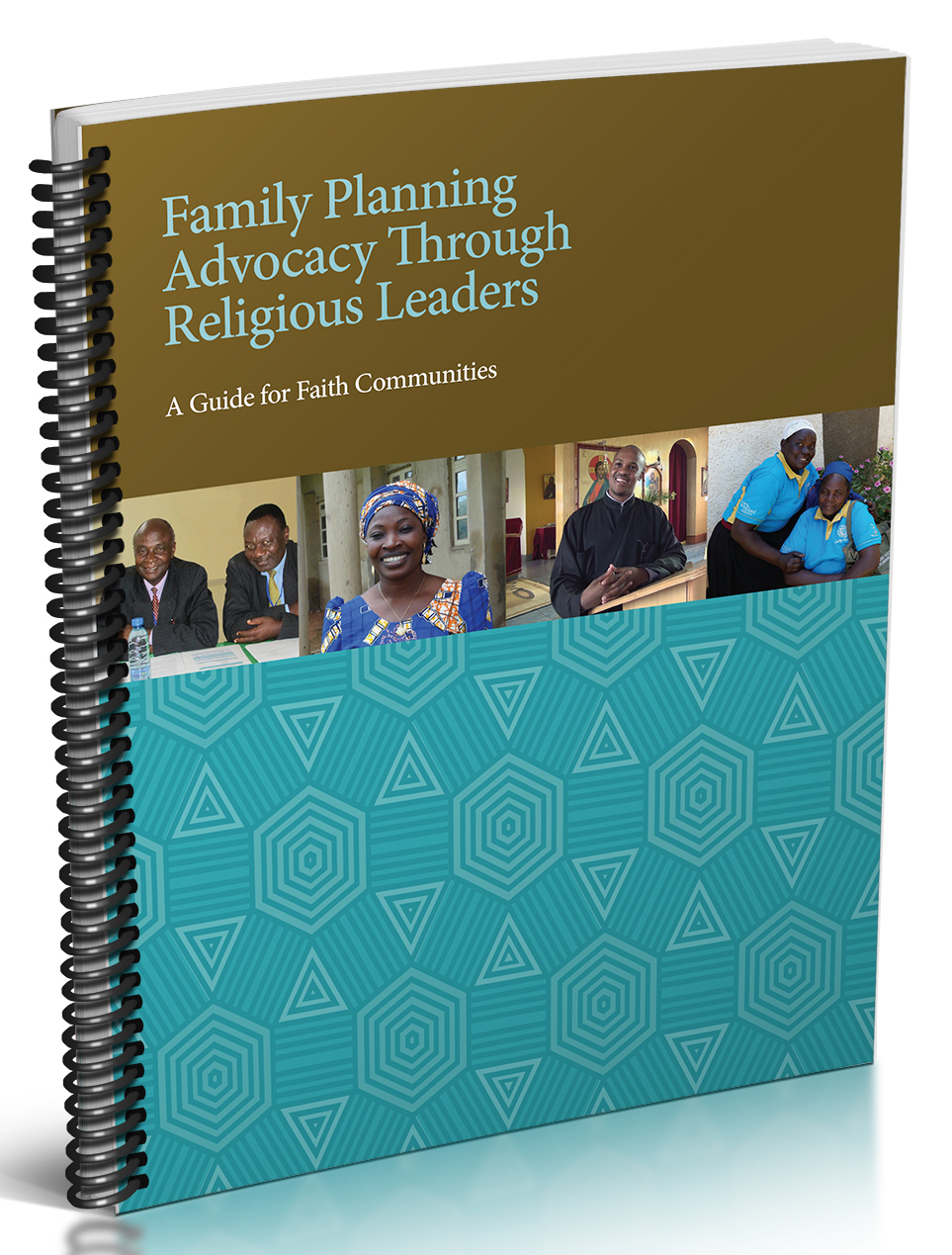 CCIH has released a collection of resources to help faith-based organizations advocate for family planning with the engagement of religious leaders. In cooperation with the Christian Health Associatiion of Kenya, the Churches Health Association of Zambia and the Ecumenical Pharmaceutical Network, CCIH developed a step-by-step guide to help organizations train religious leaders to advocate for family planning with their communities, governments and the media. The guide is available in English and French. The collection of resources and the guide can be found.
Download

The produced by Berkley Center in Georgetown University focuses on a series of short narratives about family planning programs in six very different Muslim majority countries: Indonesia, Bangladesh, Pakistan, Iran, Morocco, and Senegal. They were selected to reflect a range of different circumstances and because there was an identifiable effort by government and other leaders to engage religious communities in each case."
Download 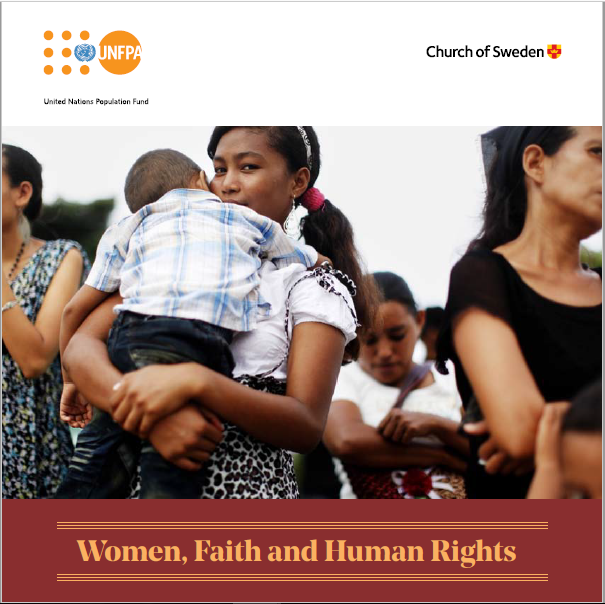 This is an overview of honest and critical thinking, by women and men of faith, and human rights actors, on the relationship between human rights and their respective faith traditions. Convened by UNFPA over a number of years, with support from the Norwegian Agency for Development Cooperation and under the auspices of the Church of Sweden, these authors straddle the worlds of religious leadership and faith service, while also powerfully advocating for gender equality and human rights.

This publication provides a glimpse into the arguments made by these contributors, who are from different countries and diverse faiths. Their views are described in language that seamlessly combines the principles of human rights with religious norms and interpretations. How they articulate the connection between faith and human rights proves to be both enlightening and thought provoking.
Download

This report focuses on the role of religious actors, and religious considerations in the SDG agenda, particularly as they pertain to gender equality, peaceful coexistence and security considerations. The perspectives, ideas and initiatives discussed in these pages bring together experiences and policy analysis shared from the different realities of Donors, UN agencies and Faith-Based NGOs. The narratives build on and inform policies - required at a time when religion is predominantly viewed as an emerging challenge.
Download

Strategic Communication for Behaviour and Social Change in South Asia

This working paper presents a synthesis of the latest experiences in applying various communication approaches ranging from mass communication and entertainment education, interpersonal communication, participatory development communication, advocacy and social mobilisation that have been used in South Asia and elsewhere.
Download

This toolkit aims to help those working in family planning across Africa to effectively advocate for renewed emphasis on family planning to enhance the visibility, availability, and quality of family planning services for increased contraceptive use and healthy timing and spacing of births, ultimately, improved quality of life across the region.
Download