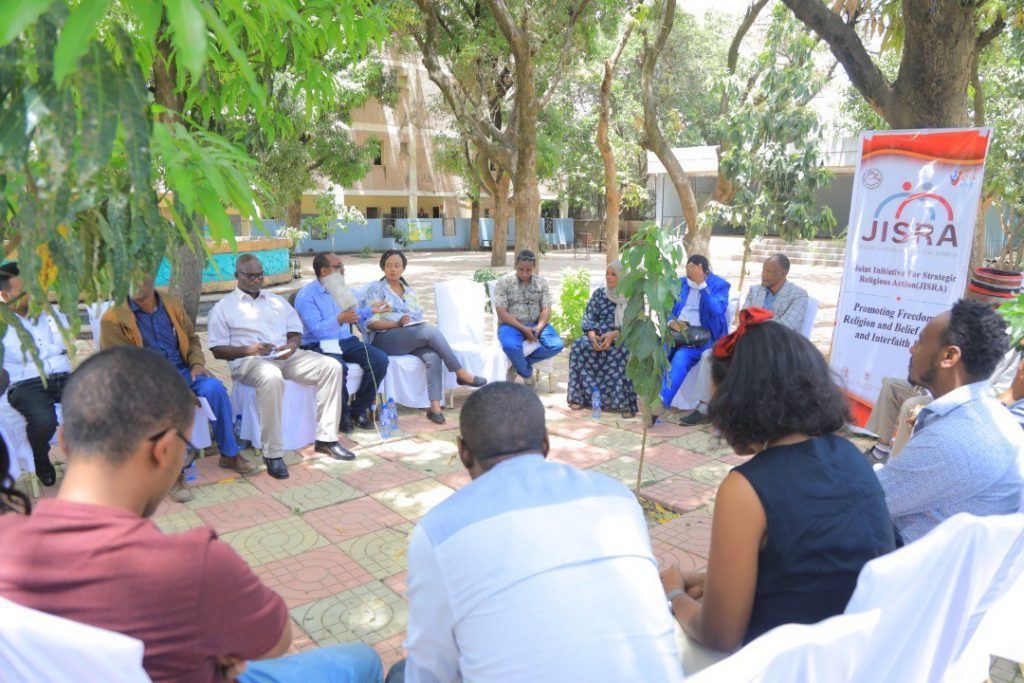 Interfaith dialogue is being used more frequently to promote peace and resolve disputes. Discussions can affect people’s perceptions of “the other”, thus defusing tensions between the parties and ultimately transforming unfavorable preconceptions and attitudes, making it a transformative peacebuilding technique. In the words of the Academy for Cultural Diplomacy, the term “interfaith dialogue” refers to a “positive and constructive interaction between individuals of different religions, faiths, or spiritual beliefs, with the aim of promoting understanding between different religions to increase acceptance and tolerance.”

By incorporating interfaith dialogue into a variety of formats in their interventions, partners in the Faith to Action Network have influenced peaceful coexistence. We work with groups in Uganda, Kenya, Indonesia, and Ethiopia to enhance the right to Freedom of Religion and Belief (FoRB). However, this section focuses on the work we did in Ethiopia.

In Ethiopia, the Ethiopian Interfaith Forum for Development, Dialogue, and Action (EIFDDA) is bringing together a variety of groups to talk about challenges related to interfaith relations and security issues. These efforts include faith actors from various religious denominations––such as Orthodox, Muslim, Pentecostal, and Catholic––traditional leaders, community elders, women’s groups, and youth organizations. These leaders were trained on different topics including FoRB, social cohesion, and interfaith peace dialogue as a tool to create harmonious coexistence in the community.

During the training, concerns regarding the conflict between the Sidama and Oromo ethnic groups–– which lasted for more than eight months––were raised. The violence had an impact on communities, resulting in the relocation of some of members. Communities and minority groups lost their social cohesion, and rebel groups looted religious institutions of their equipment. The conflict between the two neighboring ethnic groups has been resolved by faith leaders, government officials, and youth leaders, despite the fact that there are still tensions among the community members who live in the conflict’s vicinity.

In addition to assisting with the restoration efforts in those areas over the past few months, EIFDDA has organized interfaith peace discussions that have included all significant parties. By doing this, two churches and a private home that were destroyed during a battle were rebuilt. Additionally, local faith-based organizations have been working with government agencies to help relocate people to their original locations.

EIFDDA had the chance to learn more about the advantages of the training through interviews with six of the trained leaders. These leaders intervened to end a half-day of gunfire between the government and an armed group by persuading the fighting squad to negotiate. At the conclusion of the talks, the armed group agreed to put an end to the fighting. As a result, the leaders were able to stop further destruction of their town. Even though it might not be safe for them to do so, the six able leaders risked their lives in order to put an end to gunshots in their neighborhood. The six peace builders credited their increased knowledge of the value of peaceful communication in resolving disputes in the community for giving them the courage to participate in this invention.

The initiatives are a part of the Joint Initiative for Strategic Religious Action (JISRA) program, and together, we strive to create inclusive, just, and peaceful communities where everyone can practice their FoRB.