Faith to Action Network > What We Do > Peaceful, Just and Inclusive Communities > in Burundi 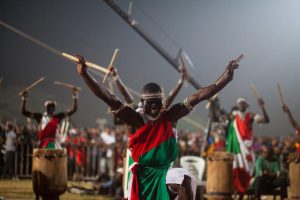 The Inter Religious Council of Burundi (IRC-Burundi) is implementing a project titled Combatting Political and Religious Violence, Radicalisation and Extremism through Multi Religious Collaboration in Burundi. IRC-B conceived the project to respond to the challenge of ethnic radicalisation and extremism and religious divisions in the country. It aims at promoting harmony between faith communities and collaboration between religious leaders with a view to fostering peaceful co-existence between religious formations and local communities in Burundi. During the first phase, the project activities will be conducted in Muyinga, Rumonge, Bujumbura Rural and Bujumbura Mairie provinces where incidents of ethnic radicalisation and ethnically driven violent extremism are more frequent. The project will enhance capacities of religious leaders so that they can promote harmony and build the capacities of women and youth so that they can respond to ethnic radicalisation and violent extremism.

IRC-Burundi is an inter-religious organisation comprising of Catholics, Methodists, Anglicans, Lutherans and the Evangelical Church of Burundi. It also has a partnership with the Muslim Council of Burundi. The inter-religious nature gives IRC-B unique capacities and advantages and places the organisations at a distinctive position to implement interfaith work. The partner organisations established it in 2008 with funding from the Catholic Relief Services. Since then the IRC-B has built a good track record of implementing projects of similar work, scope and magnitude.  For example, the African Council of Religious Leaders – Religions for Peace has in the past funded IRC-B to implement a project on peacebuilding. USAID has also funded IRC-B in the past to implement a project on returnees, land and truth and reconciliation, and peacebuilding that conducted activities in eight provinces. The UN Democracy Fund enabled IRC-B conduct activities on governance and democracy in eight provinces. And while UNICEF funded IRC-B to build the capacities of religious leaders in children protection, UNDP through UNESCO funded another project on tolerance, peaceful co-existence, social cohesion and reconciliation. Further, the IRC-B has implemented other, one-off events, on gender based violence, small arms, returnees, truth and reconciliation. Combined with IRC-B’s inter-religious nature, this long track record of implementing similar projects places the IRC-B in a unique position to contribute to promote harmony between faith communities and collaboration between religious leaders.

As part of project preparations, a team from Faith to Action Network and African Council of Religious Leaders – Religions for Peace travelled to Bujumbura from 16-22 September to orient the IRC-B team to the grant requirements, EU rules and principles, review, quality and standards of the documents, and the contracting process. The organisation signed the subgrant agreement in October and started implementing the project in November 2018.

Most Recent Interfaith work in Burundi