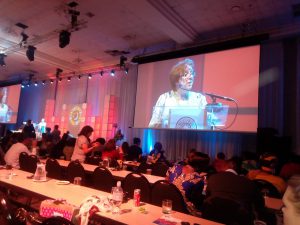 Newly elected officials of a globally renowned women’s movement have pledged commitment to increasingly develop the leadership capacities of women at the community level. The new board officials said they are committed to regenerate the worldwide movement, by specifically addressing the challenges faced by women in providing leadership at community, national and global levels.

Ms Mira Rizeq, President of Young Women Christian Association (YWCA) Palestine, was elected President of the movement’s World Council during its business meeting held in Johannesburg, South Africa. The new council is made up of 20 members, of whom sixty percent are young women below the age of 30 years.

In her acceptance speech, Mira pointed to the need to cultivate women’s leadership that encompasses the old and the new generation. “I commit to a participatory and inter-generational leadership and culture, which will help move us forward. I recognize this as a core role, value and responsibility of mine as the President.  I hope that I will succeed in facilitating an inter-generational leadership development process which will help us deliver our mission with dignity and integrity, and with best standards of good management and accountability,” she said.

“Let us not forget that we are here to improve the lives of these most vulnerable women that face atrocities, displacements, violence, poverty and death every day, we have the ethical responsibility to keep their hopes alive,” she added.

Mira gave her acceptance speech at the conclusion of a six-day conference which also included a meeting of the highest decision and policy-making body, the YWCA World Council. Businesses of the Council included reports from the World YWCA Treasurer, Young Women Global Advisory Council as well as presentation and adoption of the Strategic Framework (2020-2023) by General Secretary Casey Harden.

Amendments to the World YWCA Constitution were also presented for voting by delegates. One of the amendments, which sought to rephrase the preamble’s foundation of the movement on faith in God the father, Jesus Christ and the Holy Spirit, was voted against by majority of delegates. Delegates also voted for members of the World Board, including its new President Mira Rizeq.

Marina Youssef, a young woman delegate from Egypt welcomed the new strategic direction thus: “YWCA Egypt has not had strong linkages between young and older women, but now we will change tact. We will still use our summer cams as spaces for capacity building but strengthen collaboration between young and old women to run the program.” YWCA Kenya was also among the first delegations to congratulate Mira and the new Board.

The conference in South Africa was attended by delegates and observers from member associations across the world, as well as special guests from supportive institutions including Faith to Action Network, Royal Tropical Institute (KIT) and Christian Aid.

“I call upon you all to facilitate a process of developing inter-generational leadership among women. Together let is make this world a world that promotes justice, peace and freedom for all,” concluded Mira amidst wild applause, song and dance from the conference participants.