Faith to Action Network > In the News > Advocacy > UNITED NATIONS: Toward significant participation of Global South Faith Organizations at UNCPD and other forums, Lessons and Recommendations

UNITED NATIONS: Toward significant participation of Global South Faith Organizations at UNCPD and other forums, Lessons and Recommendations 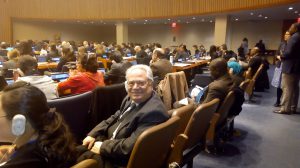 NEW YORK, APRIL 14, 2018 (F2A) – The Population Commission was established by the Economic and Social Council in its resolution 3 (III) of 3 October 1946. In its resolution 49/128 of 19 December 1994, the General Assembly decided that the Commission should be renamed the Commission on Population and Development. In the same resolution, the Assembly decided that it, the Council and the Commission should constitute a three-tiered intergovernmental mechanism that would play the primary role in the follow-up to the implementation of the Programme of Action of the International Conference on Population and Development, and that the Commission, as a functional commission assisting the Council, would monitor, review and assess the implementation of the Programme of Action at the national, regional and international levels and advise the Council thereon.

The ICPD has gone through many reviews and other important issues emerged. One of the challenges noted in reviews and negotiations is the limited participation of the faith community and lack of diversity of faith voices. This has seen challenges in implementation of decisions at country level once consensus is reached at UN. Some factors that have led to limited participation include lack of space, cost and technical capacity. The Church of Sweden has helped address the three limitations through sponsorship of delegates – cost, registering them with faith organisations with UN accreditation – space, and building their technical capacity through meetings (skype and face to face).

What has been the result of limited participation of faith voices at CPD among other UN forums?

Within CPD, it is crucial to include diverse religious leaders and faith organisations in discussions and negotiations as they influence policy and decision making at national level.
Based on informal feedback from the Faith to Action Network, Church of Sweden sponsored delegates at CPD. The following were the lessons;

The delegates register their appreciation to Church of Sweden for sponsoring their participation at the CPD and the exposure therein.

For and on behalf:
Name Organisation / Institution Position