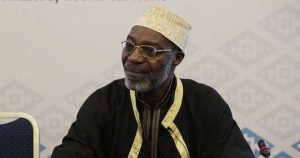 NUSA DUA, INDONESIA— Regally statuesque in his long black robe and gold hat, Sheikh Mangala Luaba favors a more humble moniker over his many loftier titles: “I am not grand,” the Grand Mufti insists. “God is grand. I am small. I am a servant of God.”

He is not the least bit reluctant to make a grand claim for family planning, however, linking it to nothing less than “the welfare of mankind.” As a faith leader, he has been active in the family planning movement since 2008.