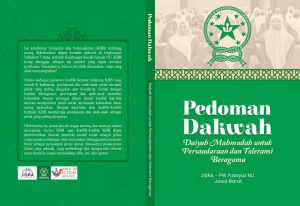 Faith to Action Network promotes women’s engagement in the understanding of religious doctrine and scripture by partnering with faith actors and faith-based organizations (FBOs). This is due to the idea that, depending on how they are used and interpreted, some religious viewpoints and texts  contribute to the liberation of women.

As part of the Joint Initiative for Strategic Religious Action (JISRA) project, we work to advance more accepting attitudes and behaviors toward women and those who hold different religious convictions. We acknowledge that different obstacles have aided in the discrimination against women; the distortion of religious texts, which have been used to legitimize discrimination, inequality, and the violation of women’s rights, is one of the obstacles.

Therefore, to make religion more understandable, we are collaborating with Fatayat-NU. Fatayat-NU is a group of young Muslim women under Nahdlatul Ulama (NU), the largest Islamic organization in Indonesia. In 2021, Fatayat-NU produced “The Guidance and Modules for Solidarity and Religious Tolerance” for Fatayat women’s preachers. Fatayat women preachers are using this guide to include the voices of marginalized and minority groups to educate women in the community about inclusivity and FoRB.

To support individuals in making a constructive contribution to gender equality and women’s rights, Fatayat-NU recognizes the importance of raising people’s levels of faith literacy on FoRB, gender equality, and women’s rights. The understanding and the use of the guide by one of the female preachers has brought about self-transformation and she shared her testimonial as below:

“The guide has changed my perspective on FoRB, affecting not only my preaching endeavors but also my teaching and learning at the University in Tasikmalaya.”

The women preachers understand that to be able to influence change; it has to start from home; with their spouses; extended families and close friends. The preachers use the content from the guide to explain different meanings of the religious texts and how they have been interpreted and used to perpetrate discrimination against women.

It is important to emphasize that the female preachers have not had it easy, especially while trying to persuade their families. It has been particularly challenging for a female Tasikmalayan preacher to persuade her husband to change his viewpoint given that he belonged to a conservative Islamic sect. Success has been achieved, however, as she mentioned that she has noticed some changes in attitudes and opinions regarding tolerating differences from her husband as time has gone on. She provides the following testimony:

“I used the FoRB strategic communication to challenge the viewpoint of conservative Islamic groups in my neighborhoods. Initially, I had to persuade my immediate family; I had to allow for understanding and respect among my own family members’ diversity.

As we conclude, by working with Fatayat-NU, Faith to Action Network is gradually increasing the role of women in setting the vision and solutions for gender in advancing FoRB and promoting women’s participation in decision-making fora.

Faith to Action Network and Fatayat-NU will continuously share the impact the use of the guide has had on different communities and share progress as days go by .

Here is the Module in Bahasa:

Here is the Guide In Bahasa:

Here is the Summary in English:

Executive Summary of the Guidelines and Module of Women