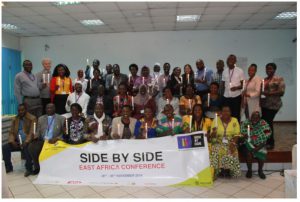 The initiatives mostly run by faith-based organisations included Side by Side movement, Waking the Giant, Tamar Campaign and Awarelo Campaign. Others were the ACT Alliance Gender Justice Campaign and Thursdays in Black. Faith to Action Network showcased progress made under the #RightByHer Campaign that it is implementing together with other faith-neutral organizations.

The forum was organized by Norwegian Church Aid under the aegis of the Side by Side East Africa Conference. Atleast 36 FBOs drawn from the East Africa region were represented in the three-day workshop.

Experiences shared by representatives of the various campaigns were part of efforts to make faith-based actors more coordinated and collaborative in taking affirmative and common action towards gender justice policies and programmatic outcomes.

During a session on the role of faith in achieving gender justice, Faith to Action Network presented its advocacy actions towards sexuality and reproductive health in the East African region. Peter Munene, the CEO of Faith to Action Network, discussed extensively about the experiences, challenges and outcomes in the process of enacting the East Africa Community (EAC) Sexual and Reproductive Health Bill 2016 at the East Africa Legislative Assembly (EALA).  He said the Bill provides a framework for the promotion and advancement of SRHR to all, promotes safe motherhood, prevents bad practices such a as child marriage, FGM and other, prevents unwanted pregnancies.

Workshop participants also agreed to contribute to and ensure effective implementation and monitoring of the African Union Gender Equality Strategy in their respective countries, with a focus on eradicating Sexual and gender-based Violence (SGBV) and caring for survivors.