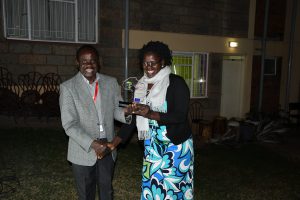 Nairobi, KENYA; 31 August 2019 (Lorna Andisi) – The Uganda Joint Christian Council (UJCC), its member churches (Catholic, Anglican and Orthodox) and the Inter-religious Council of Uganda are working to eradicate FGM through their religious leaders.

“Uganda has a rich legal and policy framework that promotes gender equity however, the implementation is poor. We prioritize to build capacity of religious leaders so that they can understand the legal framework and different referral points depending on the nature and magnitude of harm” Said Dinah Akallo, UJCC

Speaking in Nairobi during a recent convention that brought together inter-faith leaders and faith-based organizations from across Africa, Dinah Akallo, UJCC, said that a law passed in 2010 banning FGM in Uganda has helped to bring down the prevalence.

However, she admitted that some communities still continue to perform the rite, although they do so secretly. Anti-FGM crusaders refer to such communities as hotspots.

“Despite several interventions, FGM has remained remarkably persistent in some isolated communities in Uganda, with some communities crossing the border to perform it in nearby countries,” Dinah said.

The church expressed concern over the fact that the act is often performed on minors, and referred to it as a form of gender-based violence that infringes on the sexual and reproductive health and rights of women and girls, and undermines their dignity.

“We use the Bible as our biggest constitution to educate the masses on Gender Based Violence and FGM. God created us in his own image and likeness, besides the Bible does not mention anywhere about female circumcision,” Dinah Said.

According to UNFPA, nearly 200 million girls and women around the world have gone through the cut. The consequences are both physical and psychological and can last a lifetime.

Dinah said the council favors an approach that empowers the communities to decide for themselves to abandon the practice, as this will instill in them a sense of self-sufficiency.

She said, “Our church utilizes their structures in the affected regions to organize community dialogues with cultural leaders and educational forums for parents, so that the issue of FGM, GBV and HIV/AIDS is widely discussed and consensus is reached on locally acceptable solutions to address the problem”

She also said that uncircumcised married women facing stigma opt for this route in later years, because culture attaches significance to a woman mutilated.

The UJCC is also running a project with the government to scale up gender and equity budgeting in local governments.

Some of the strategies UJCC use to eradicate FGM include capacity building for religious leaders, issuing press statements to hold the government to account, engaging with the media on talks shows, i.e. Radio talks shows that are religion based, and educate the masses on the existing laws that protect the victims.  UJCC also instituted gender-based violence monitors within the community to take note of GBV incidents and report to authorities.

The masses need to be educated on the existing laws as majority are still ignorant about them,” said Dinah.

The UNFPA notes that the global target of eliminating FGM by 2030 will only be achieved if efforts are intensified to address the problem.

Over the past three years, UJCC alongside the Church of Uganda and the Ministry of Gender has been staging an annual anti-FGM run during 16 Days of Activism to raise awareness about the dangers of circumcising girls in Kapchorwa District, where FGM is high.

UJCC is committed to improve the health and well-being of its people as part of God given mandate. This has been partly possible through training and capacity building of religious leaders, as the one offered by Faith to Action Network.